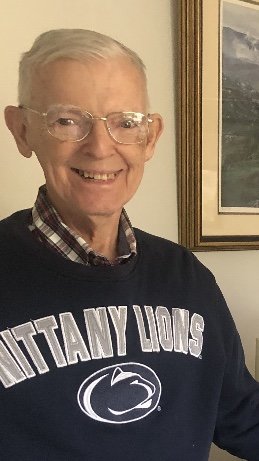 Please share a memory of Eugene to include in a keepsake book for family and friends.
View Tribute Book

Eugene P. Flanagan, a native of Manayunk and a long time resident of Roxborough, went home to be with his Lord, peacefully, on July 25, 2020.
He, along with his four brothers, were raised and educated by the IHM sisters at St. Aloysius Academy in West Chester, PA. He often told humorous stories about his years there and fondly recalled the many sisters who were such strong influences in his life.
Gene enlisted in the Air Force in 1951 and served in Germany during the Korean War. After his service, he worked for JCPenney, at the time one of the world’s largest retailers, where he became an exceptional sales leader, often receiving top sales awards.
He was a member of The Knights of Columbus and was recently recognized by Malvern Retreat House for 50 years of attending annual retreats.
At heart, though, he was a family man, who would do anything for anyone, never asking for anything in return. He was the family driver, the family photographer and the family defender.
He was a faithful parishioner of Holy Family Parish where he served as Eucharistic Minister, as altar server and as caretaker. He shared a very close bond with Pastor Emeritus Father Francis McKee.
Gene is survived by his beloved wife, Terry, with whom he shared 59 years of marriage. Their frequent trips to Ireland, Terry’s homeland, made for very fond memories.
He is also survived by two loving daughters, Annie and Maureen, 6 adoring grandchildren, Francis, Ava, Rory, Sebastian, Camille and Lachlan, one loyal brother Ed, and many nieces and nephews, three of whom with which he shared a particularly close bond, Kathleen, Marie and Bill.
He was predeceased by 6 brothers, Bill, Jack, Tom, Joe, Frank and Ray.

To send flowers to the family or plant a tree in memory of Eugene Flanagan, please visit Tribute Store
Thursday
30
July

Look inside to read what others have shared
Family and friends are coming together online to create a special keepsake. Every memory left on the online obituary will be automatically included in this book.
View Tribute Book
Share Your Memory of
Eugene
Upload Your Memory View All Memories
Be the first to upload a memory!
Share A Memory
Send Flowers
Plant a Tree