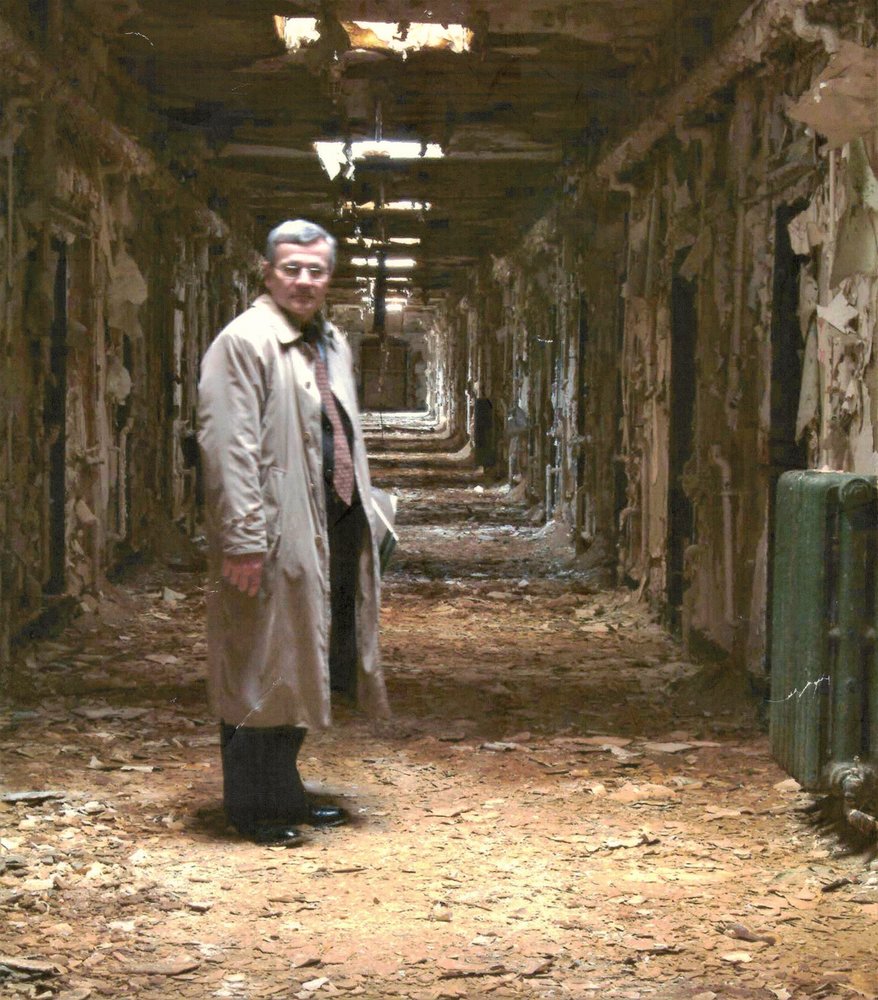 Please share a memory of Edward to include in a keepsake book for family and friends.
View Tribute Book

Edward James Cameron passed away peacefully at his home on October

and Camilla Cameron. He was the fifth of eight children. His father was an oil driller, and

the family moved frequently due to his work. They finally settled in Mount Sterling, in

Western Illinois, a tiny town with a population of less than two-thousand people.

Throughout his years at Saint Mary’s Elementary School, Ed served as an

altar boy at Holy Family Catholic Church. In 1972, he went on to graduate from Brown

County High School, where he was on the football and wrestling teams. Even in grade

school and high school, Ed was known not only for his intelligence, but for his fairness

and sense of justice. He would not stand for bullying on the playground or a missed call

in sports, and he was quick to confront any aggressors or argue his position to a coach

or a teacher. His classmates would learn not to argue with Ed because they knew he

had done the research on whatever the topic was, and that he was almost always right.

He had a thirst for knowledge, and would do anything to acquire it, often reading

encyclopedias during recess to maintain a competitive edge. However, Ed was known

to always be a gracious winner, and he also never held a grudge .

Ed went on to graduate from Western Illinois University in 1976, with a

Bachelor of Arts degree in Political Science and a minor in History. He then left Illinois

for Ann Arbor, Michigan, having been accepted to the highly-ranked University of

Michigan Law School. When he graduated in 1979, he headed to the East Coast after

landing a job at a large and prestigious law firm in Philadelphia. Ed did not enjoy big firm

life, however. He wanted to be in court where the action was, and he wanted to work on

cases that would impact the lives of others.

To that end, in 1981, Ed joined the Philadelphia District Attorney’s Office

as an Assistant District Attorney (ADA) in the Trial Division. In 1986, he was promoted to

the Homicide Unit, where he eventually became Assistant Chief. He remained in that

position until he moved to the Insurance Fraud Unit in the fall of 2018. Ed had the truly

District Attorney’s Office, having served over thirty-two years in that unit.

During that time, Ed brought justice to literally thousands of victims and a

sense of closure to their families. He was an outstanding trial attorney, known for his

integrity, his unrelenting determination, his creativity and ingenuity, his tireless work

ethic and dedication, and his ability to remain calm no matter the circumstances. He

was generous with his knowledge and his time, and he was constantly consulted by

others seeking his highly-valued opinion and advice. His colleagues knew that they

could alway rely on him for anything they needed, including a good laugh, because as

serious as he was, Ed always liked to have fun.

Ed mentored many younger attorneys, and those who were new to the Homicide

Unit, but as one veteran Homicide prosecutor noted, “the longer you were in the

Homicide Unit, the harder it was to find anyone who could help you as the senior

prosecutors would leave the office or retire.  However, Ed was always there, willing to

listen, and there was nothing he hadn’t done or hadn’t seen. He was always a great and

valuable sounding board for trial strategy. Whenever he was on trial, I would try to go

and watch him because I always knew I would learn something”.

Ed was a low-profile guy who tried many high-profile cases. Despite his

accomplishments, he always remained humble, and never sought the limelight. His

colleagues note that “no matter his incredible results with his cases, he never talked

about himself. it was never about him; it was about the job. He was respected and

Lynne Abraham, acknowledged the importance of Ed’s work in a letter to him, stating

“You were never vainglorious or prideful. You went about your responsibilities with a

cheerful demeanor, and never failed to help anyone who sought your wise counsel.

Remarkably, you did all this and more for decades; as others came and went, you

stayed true to your calling. For your steadfastness, courage, work ethic, and

professionalism in this long march to justice, I thank you most sincerely for a job very

The only thing that mattered more to Ed than being a prosecutor was his family.

On a winter night in 1983, a visit to the Irish Pub on Walnut Street led Ed to a chance

meeting with Julie Lundberg, his love and true companion. They were married in

September, 1984, and had two children, Mackensie (Mac) and Camilla (Millie). Ed was

a devoted husband and proud father. He loved to do any kind of project with his

children, whether it was making Christmas cookies and (later) beer with them, growing

vegetables in the garden, or teaching them how to fix things around the house. Ed was

very skilled at home repair, and remodeled every room in his Manayunk home on his

own, from floor to ceiling. There was always a weekend project. Ed liked to stay

constantly busy, and when he wasn’t working, he was reading any murder mystery or

spy novel he could get his hands on. He was also an avid runner, and competed in the

An avid outdoorsman, Ed and his family looked forward to their yearly camping

trip to Promised Land State Park. They also loved to spend time at the ocean, with

and Julie enjoyed traveling to various islands, such as St. John, which was a favorite.

Ed also had a fondness for animals, especially dogs, and he treasured his loyal golden

retriever dogs, Bailey and Snowball, who were always by his side.

In addition to his Julie and his children, Ed is survived by his sisters: Christine

as well as many cherished nieces and nephews. He was predeceased by his parents,

Donald and Camilla, and his brothers Gary, Benjamin and David. He will also be greatly

Interment will be private. Due to the Covid-19 pandemic, a viewing and memorial

service as well as a funeral Mass will be held in Spring of 2021. In lieu of flowers,

please consider a donation to the Glioblastoma Foundation.

To plant a beautiful memorial tree in memory of Edward Cameron, please visit our Tree Store

Look inside to read what others have shared
Family and friends are coming together online to create a special keepsake. Every memory left on the online obituary will be automatically included in this book.
View Tribute Book
Services for Edward Cameron
There are no events scheduled. You can still show your support by planting a tree in memory of Edward Cameron.
Plant a tree in memory of Edward
Share Your Memory of
Edward
Upload Your Memory View All Memories
Be the first to upload a memory!
Share A Memory
Plant a Tree